Perennial Planters is a proud member of the
Garden Club of America and the Rhode Island Federation of Garden Clubs​
The Perennial Planters Garden Club fosters a community of horticulturists dedicated to the love of gardening and to the improvement and benefit of the urban landscape through action in education, conservation and preservation.  In addition to membership in the Garden Club of America and ongoing collaboration with other GCA Clubs, Perennial Planters is actively involved with the Rhode Island Federation of Garden Clubs, sharing the advantages of association by means of educational meetings, conferences and correspondence, not only in our Community but in our State, Nationally and Internationally.
​

Can a trip to the dump be fun? Absolutely!
by Emily McDermott

When I was a little girl, before my dad could afford to have the ‘garbage man’ come to our house and empty our trash barrels once a week, Saturday afternoon was our time to load those green barrels into the trunk of the car and drive our trash over the railroad tracks to the town dump. For me this was great fun spending time alone with my dad in this mysterious land filled with things like old bikes, Clorox bottles, food wrappers, worn out mattresses and not a sign of recycling because it wasn’t really a ‘thing’ back then. If only my dad could have come with me and my fellow Perennial Planters last month on our ‘field trip’ to Rhode Island’s ultimate dump, The Rhode Island Resource Recovery Corporation. He would have been amazed!

I have to admit, I was immediately impressed by the size of this place! From my car, above a smattering of low lying cement buildings, I saw a vast landscape of rolling grass and dirt covered hills, crisscrossed with unpaved roads that were dotted with slow moving trucks that looked like toys in the distance. As I passed thru the entrance and parked my car, I was hoping today’s tour would take us up into those hills!
There were six of us ‘Planters’ joining the 11:30 tour on a comfortable white school bus with a cheerful young guide named Jenny standing up in the front. As we lumbered along the dirt roads she pointed out disposal sites for tires, appliances, metal and various ‘toxic’ liquids like antifreeze.

Our route continued past long rows of compost in an area the size of a football field before heading up ‘into the hills’. Our guide Jenny pointed out that these hills of thrash from around the state were about 250 feet high and they included the annual 100,000 tons of food scraps that make their way into this nearly 400 acre facility.

Driving thru these hills we noticed hundreds of black pipes with bright orange tubes coming out of the ground. We learned they were installed to prevent methane (a greenhouse gas produced by tons of garbage) from getting into the atmosphere. Good idea! Landfills are one of the biggest sources of methane emissions.

The scenic highlight of our bus journey was our stop at the top of our hill where we enjoyed a panoramic view of the Providence skyline, the Bay and beyond. Who knew such a lovely view could be had from a landfill! (Did I just use ‘lovely’ and ‘landfill’ in the same sentence?).

Returning to the bottom, we left the bus and followed Jenny into the recycling center where we saw a seemingly well oiled system of multi-level conveyor belts, chutes, and sorting systems (including humans) dealing with tons of recyclable trash on a daily basis. Yes, Jenny said tons. She also offered up some recycling ‘takeaways’ for those of us sorting our own trash at home:
*Soda/beer cans: the cans are recyclable but both the boxes they come in as well as the plastic rings that hold a 6-pack together are not.

*About those boxes: most that have any plans to be refrigerated cannot be recycled because they are treated or coated with something that can’t be processed at the plant. Items like your waffle and sausage boxes are in this category.
BUT, your refrigerated chicken broth box can be recycled because it’s put together in layers and there is actually another company that separates those layers and then recycles them. Who knew?!

*Finally, cardboard boxes: Tape or no tape, that is the question for many box thrower outers. The answer is yes, you can leave the tape on it will all be recycled.

So, would I recommend a trip to that giant landfill in Johnston? Absolutely! The view from the top and the availability of compost for your garden at the bottom is certainly worth an hour and a half if your time.

The Power and Importance of Nature
​2021 Four Club Luncheon
September 21, 2021
by Emily McDermott

The upcoming 200th birthday of Frederick Law Olmstead created a theme for discussion about the power and importance of nature for this year’s Four Club Luncheon hosted by the Perennial Planters Garden Club at the Agawam Hunt Club in East Providence.

During the past year and half, most of us spent more time outdoors walking, biking and looking for an escape from the captivity and limitations caused by the pandemic.  This relief, solace and freedom we found in nature is nothing new according to Daniel Nadenicek, Professor and Draper Chair of Landscape Architecture at the University of Georgia and the speaker for this year’s gathering of 90 horticulture enthusiasts. Outdoors, under a sunny September sky, he shared the visions and works of Frederick Law Olmstead, Frederick Billings and Horace Cleveland who collectively designed, created and worked to set aside land that became some of our country’s most treasured outdoor public spaces.  Among them are Central Park in New York City ( F.L. Olmstead),  Billings Farm and Museum in Woodstock, VT
( F. Billings, whose land conservation efforts also led to what we know as Yellowstone and Yosemite National Parks) and Roger Williams Park in Providence, RI ( H. Cleveland).

These three men along with literary ‘influencers’ of the 1800’s ( ie. Andrew Jackson Downing: “plant spacious parks in your cities” ) had a clear understanding of the power and importance of creating and preserving outdoor spaces accessible to all.  They believed that spending time out in nature provided mental, spiritual and physical health benefits. 150 years later, we all know this to be true.  Here in Rhode Island more than a million visitors a year enjoy Roger Williams Park, designed by Horace Cleveland in 1878.  He further explained his belief in the benefits of spending time outdoors in his final publication before his death: “The Influence of Parks in the Character of Children.”

This annual luncheon was organized by Liz Mauran and Nancy Compton from the Perennial Planters of Providence. Other Rhode Island clubs in attendance were from Newport, Little Compton and the South County Garden Club which will host next year’s gathering. 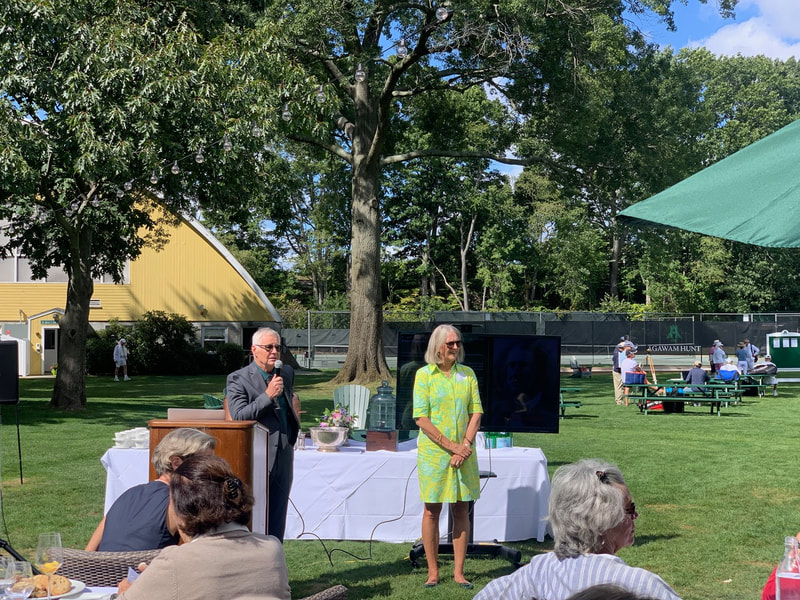 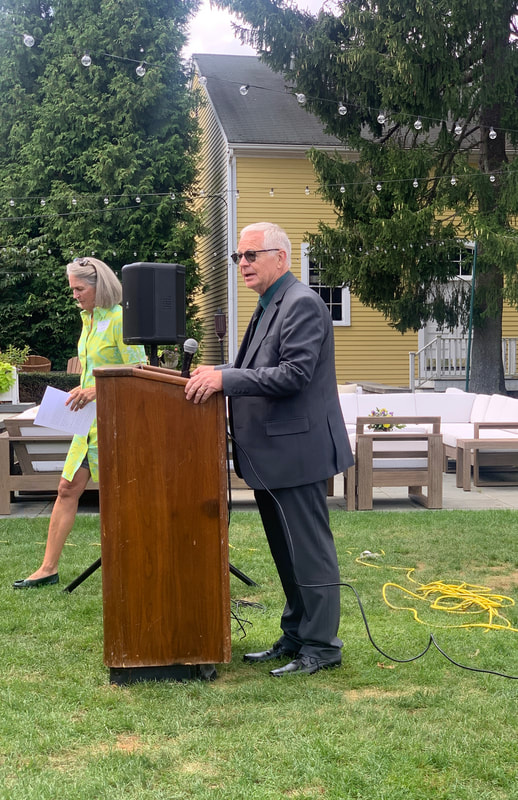 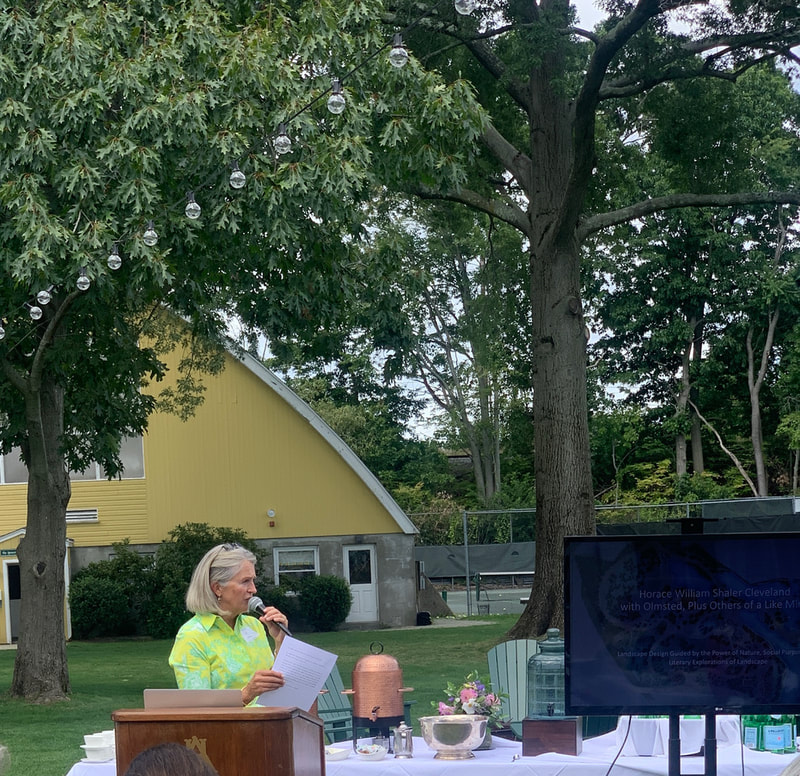 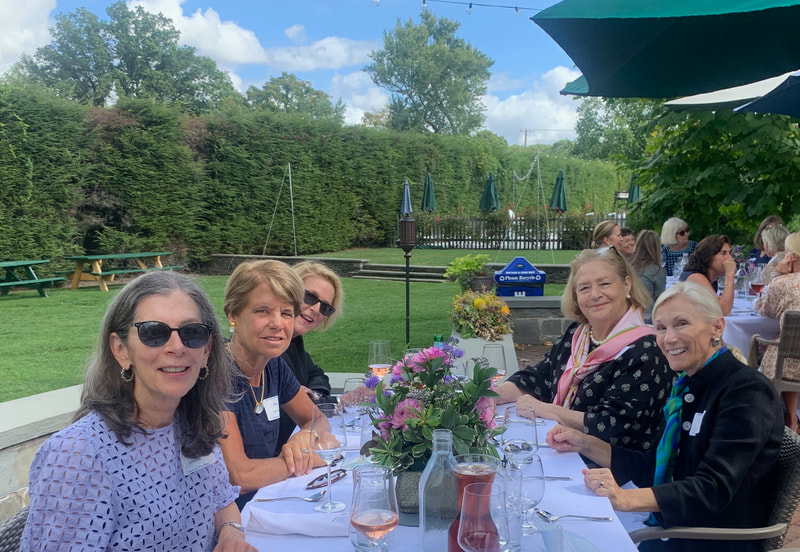 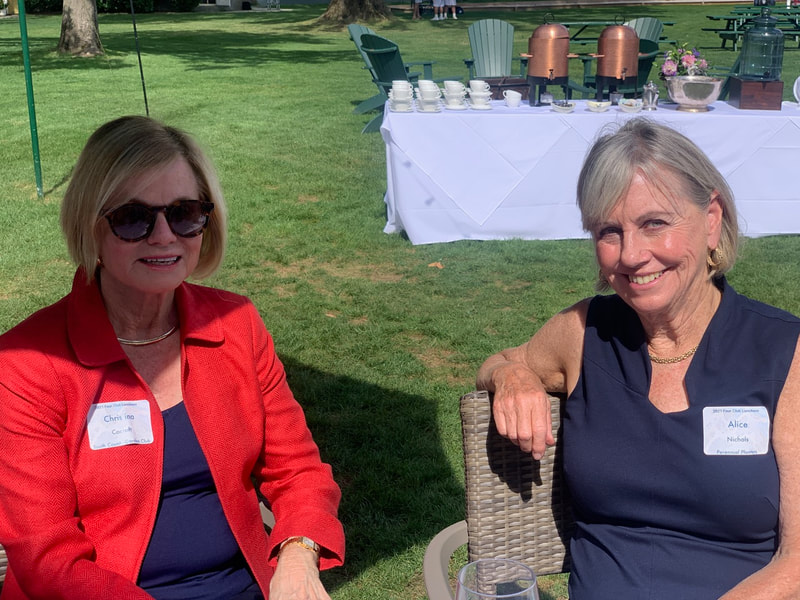 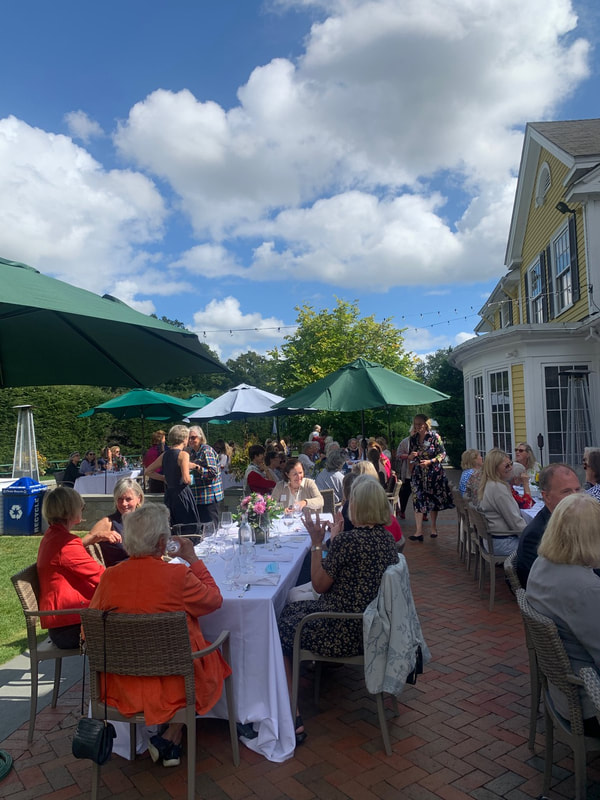 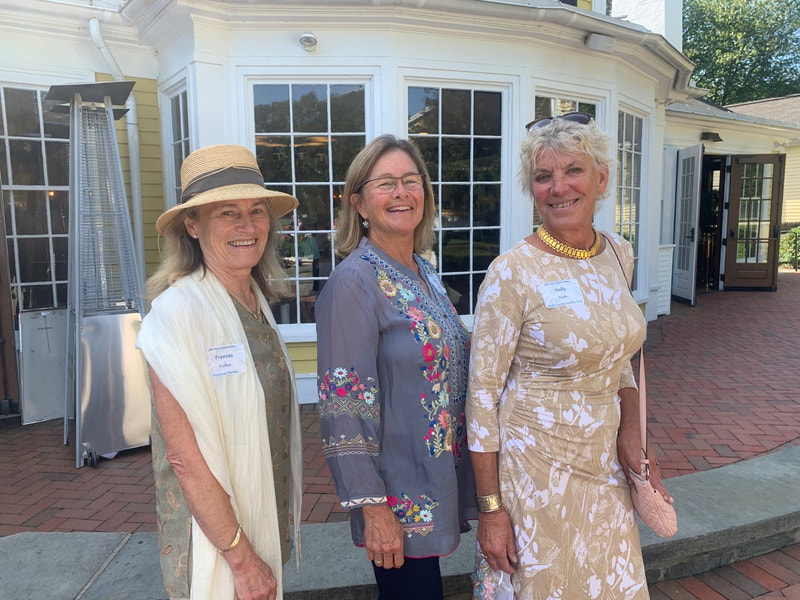 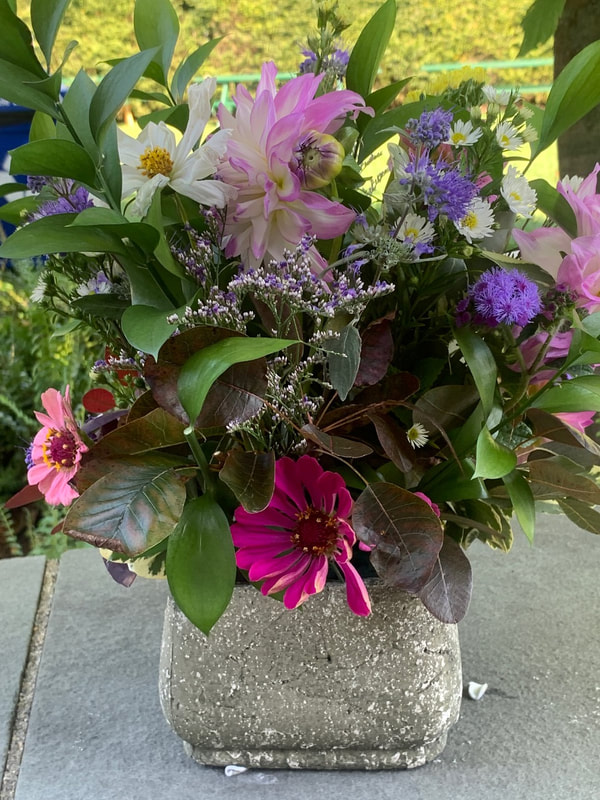 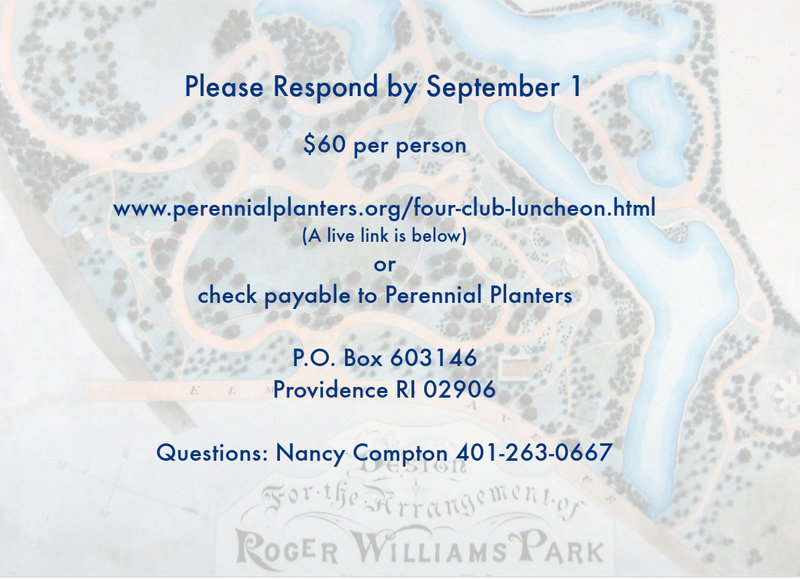 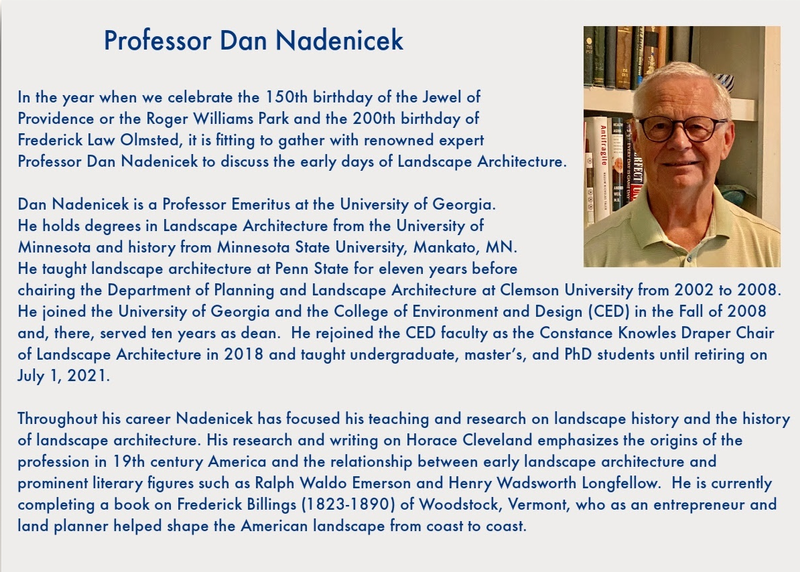 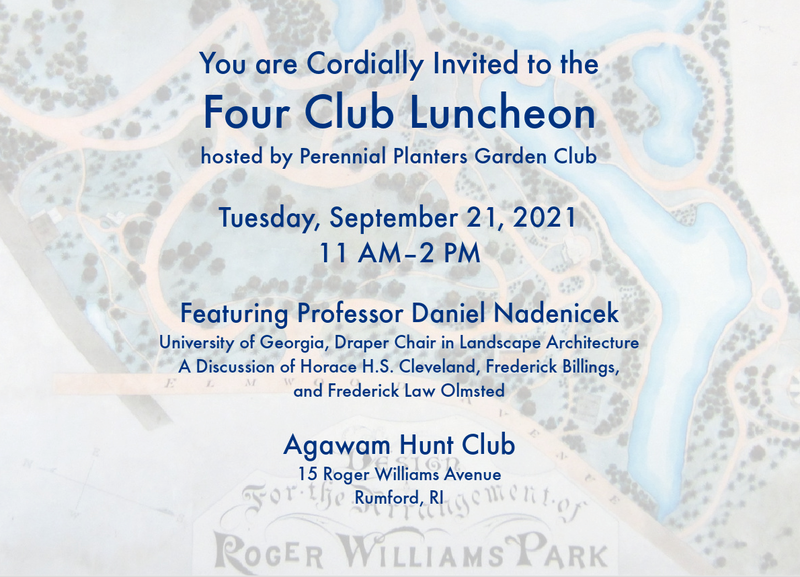